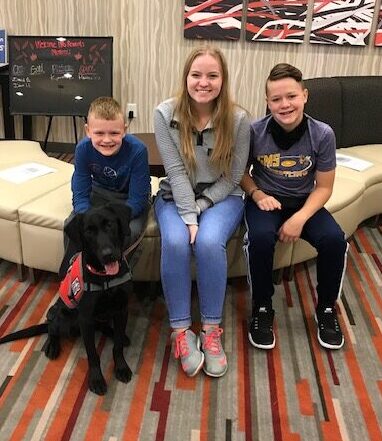 I started this blog over a year ago as a means to raise money for a diabetic alert service dog for our three kids with type 1 diabetes. I am happy to say that we officially have “a dog on the side”! Jarvis came home one week ago and we are still a little bit incredulous about the fact that he is finally home.

Last week Jarvis and his trainer (Lily Grace) flew from Idaho to Ohio to meet us. Flights at the airport closest to our home were limited due to Covid so we arranged to meet at a hotel near another airport a little more than an hour from our home. The three kids and I drove to the hotel Friday night with plans to meet Jarvis in the morning. Needless to say the kids had a hard time falling asleep due to the anticipation of meeting Jarvis in the morning.

The next morning after a quick breakfast and trip to Starbucks (because nothing good happens before I’ve had coffee), I texted Lily and said we were ready. Lily asked us to wait in the hotel lobby and ignore Jarvis like we would any other service dog in public when she entered. The wait in the lobby felt like an eternity! Every time the elevator doors dinged we would all impatiently wait to see if Jarvis and Lily would appear around the corner. As we waited anxiously I glanced at the blood sugar readings on my phone app; worried about how the spike in blood sugar from the carb heavy hotel breakfast would affect Jarvis. Would Jarvis be overwhelmed by all three blood sugars out of range at once? Would Jarvis be able to pick up their scents through the masks they were wearing? Would Lily be upset that we had not tried harder to find a low carb breakfast before meeting Jarvis?

Finally, Lily entered with Jarvis heeling on her left side like he was trained to do. The kids and I greeted Lily and then Jarvis immediately put his front paws on Joci’s chest in an effort to smell her breath. (If you want to read more about how Jarvis smells changes in blood sugar click here.) He then went back and forth between all the kids, sniffing and putting his paws up on them excitedly. He would then turn back and paw Lily because he knew the smell of the kids high blood sugar meant treats were coming. After giving Jarvis treats it was time to learn all of the words for commands that Jarvis knows. We then loaded up the minivan and headed to the mall for a day of training.

Each of the kids took turns walking Jarvis and giving commands. Lily would stop periodically and have one of the kids open a pre-collected low or high blood sugar sample (saliva soaked cotton ball) to train Jarvis to alert in public. It was amazing to watch him get so excited about each of their scents.

When it was time for lunch we headed to a nearby restaurant. We were seated in a large corner booth where Lily demonstrated the best way to place Jarvis under the table, out of the way, as much as possible. We placed our orders with the waitress and then as luck would have it all three kids began to have low blood sugar. I can count on one hand the number of times all three of them have been low at the same time! It must have been caused by all the walking we did with Jarvis that morning. Jarvis was clearly antsy under the table as he began smelling the changes in blood sugar. Lily loosened her hold on Jarvis’ leash and he began climbing up on the booth to get a closer sniff. I was amazed that even with all the smells of food and the stress of being with new people he was still able to pick up the scents he had been trained to alert.

After a long day of practicing commands and alerts it was time to go back to our hotel room with Jarvis and Lily and practice some night alerts. It was not time for bed yet but each of the kids got into a hotel bed as if they were sleeping. Then one of them would open the pre-collected low blood sugar sample and we would wait until Jarvis picked up the scent, jumped up on the bed and pawed. Then he would get a treat from the correct kid.

Meeting their new dog was the most exciting part of the day for my boys but staying in a hotel with a pool was a close second. Due to Covid, the hotel required guests to sign up for a time slot to limit the number of people in the pool. The time slots were all full when we checked in to the hotel the night before so they were unable to swim. I had signed up for a slot the following evening just in case we had time before bed to swim. After completing practice night alerts with Jarvis the boys had 30 minutes to take a quick swim. Jarvis had never seen a pool before (only a lake) but like most black labs he showed no fear of the water and tried desperately to join “his boys” in the pool.

Finally it was time for Lily to leave Jarvis with us for the night. We all got ready for bed and put a folded sheet on the floor (as Lily instructed) for Jarvis. If you have ever brought a newborn baby home from the hospital and then tried to sleep the first night you will know exactly what our night was like. As expected, Jarvis was anxious about being away from his trainer and sleeping in a strange place with strange people. On top of that, both boys had a delayed high blood sugar response from all the exertion/adrenaline in the pool. (Perfectly normal for them.) Poor Jarvis just could not settle down for more than 30 minutes at a time.

The next morning we all took another trip to Starbucks because like I mentioned before nothing good happens before coffee; especially when you have only had three hours of sleep. Then it was time to test the kids and Jarvis on the skills they learned the day before. After passing with flying colors and saying a big thank you and hugs to Lily we were on our way home. 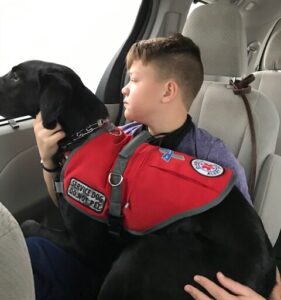 All things considered, Jarvis has done an incredible job of acclimating to our busy home with 9 people. Lily said it would be perfectly normal for Jarvis to not pick up on every low/high blood sugar in the beginning due to the stress of moving to a new home. We are working hard at giving him lots of practice alerts with samples at home and of course a lot of treats to go with them. He is getting better and better at alerting every day. Adding Jarvis to our household has not come without a lot of work but he is so worth it.