I don’t usually make New Year’s resolutions but I distinctly remember on the first day of 2019 thinking it would be nice if my faith could grow stronger in 2019. The problem was I was not exactly sure what I meant by “stronger”. I have always struggled with wanting to control everything so I decided stronger faith meant trusting God and believing He is in control even when things feel out of control.

Within six weeks of those thoughts things in my life felt VERY out of control. Cyrus’ diabetes diagnosis sent me into a tailspin that made me doubt God’s goodness, fairness, and ability to protect my family from blow after blow. I was embarrassed by my lack of faith and feelings toward God. This is NOT how I wanted to grow a stronger faith. My faith felt extremely weak because instead of wanting to draw nearer to God I wanted to retreat. I did not understand why God would choose to use my son’s health crisis to grow my faith. I begged Him to afflict me instead. 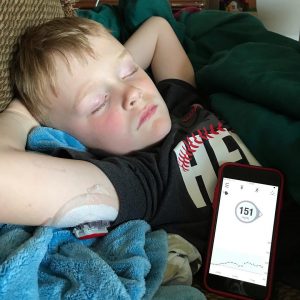 On Monday of this week Cyrus woke up with a fever. Within 24 hours he was vomiting. Being unable to keep food down is very dangerous for someone with diabetes. Food is needed to raise blood sugar and insulin is needed to keep the body from forming a high level of ketones which can make someone even sicker. Insulin cannot be given without food. After two days of vomiting and now severe stomach pain it was obvious Cyrus was not getting better. We still had two days remaining of our Florida vacation but we made the decision to cut our vacation short and drive through the night to get home. Cyrus vomited every hour for 6 hours on the way home. Instead of driving home we decided to bypass our exit and go immediately to our local children’s hospital emergency room. After receiving anti nausea medication and IV fluids he seemed to be doing better. But within 24 hours we were back in the ER. After ruling out a lot of possibilities via X-ray and ultrasound we were sent home again to ride out what was most likely a virus. That night I brought Cyrus to bed with me and watched helplessly as he vomited and rocked back and forth on his hands and knees telling me the pain was “the worst ever”. At 2am it broke my heart to hear Cy ask, “Why isn’t God making me better?” I placed my cheek against his cheek and began praying over him out loud. As soon as I finished praying Cy pronounced a hearty “Amen!” to rival even the best gospel choir.

I wish I could tell you that his pain disappeared immediately after my prayer but it was another 12 hours before he began to feel better. As I sat in the quiet darkness of my bedroom, rubbing my son’s back while he slept fitfully, I thought about his question. “Why isn’t God making me better?” There was so much faith in that innocent question. He believed God could make him well. He showed his faith in God’s ability to hear our prayer with his hearty amen at the conclusion of my prayer. Then a thought I had never considered came to me. What if this trial we are facing is less about MY faith and more about HIS faith? What if Cyrus is learning to trust God’s goodness even when he doesn’t feel well? What if God is showing himself faithful to Cyrus through the hard times? Too often I dismiss these lessons as too hard for my children to grasp. But they are grasping them in baby steps, child size steps. When I had the thought of wanting stronger faith I wanted to take a GIANT leap from weak to strong but instead Cyrus is showing me it only takes child size steps to grow my faith. I am going to stop striving for a faith like Job and start with faith like a child.