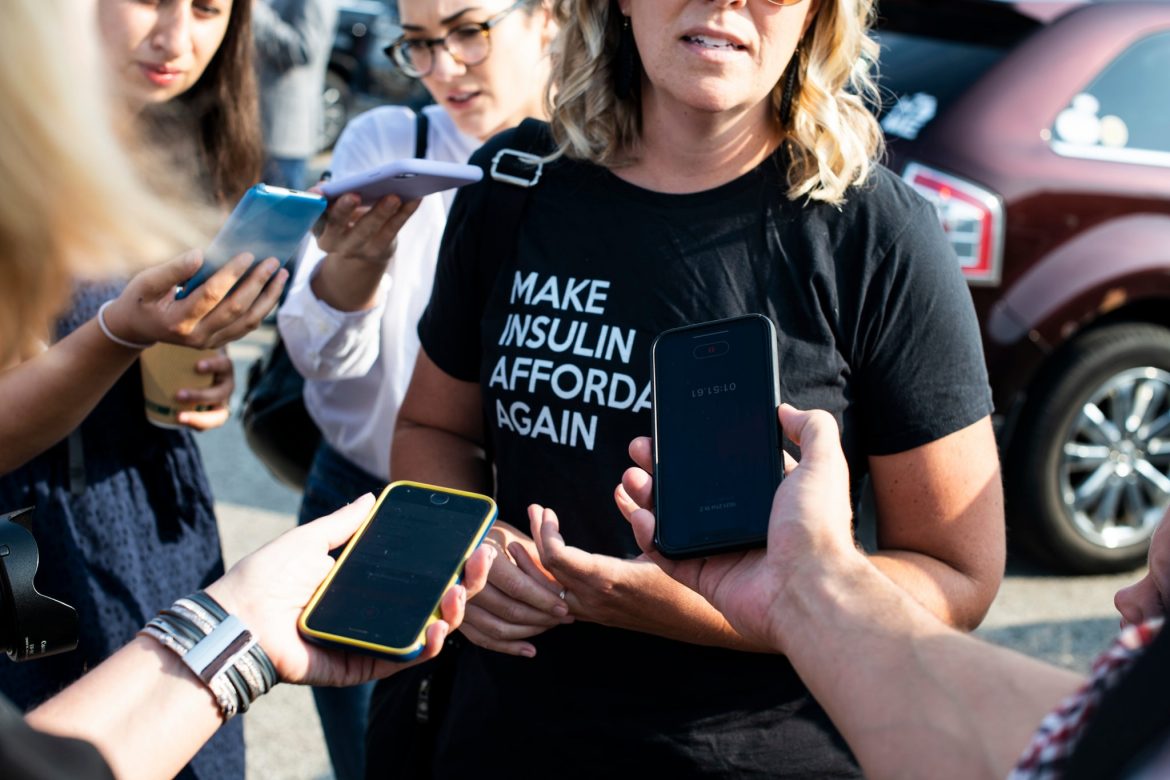 To Canada With A Candidate

I really dislike politics. An election year is like nails on a chalkboard to me. I do not follow any particular party (or person for that matter) because let’s face it, no one gets it completely right (or even half right in my opinion). In fact I would probably not even vote if I did not consider it my duty as an American citizen; not to mention it would be disrespectful to all those that sacrificed so I could have the right.  I enjoyed government class in school but the more I learned about government the smaller and less significant I felt. I do not have the time, energy or even desire to make my voice heard over the masses . . . . . . . . and yet this week I was given a microphone (literally). For the sake of my children I could not refuse the opportunity to be heard.

Remember the bus to Canada I mentioned in my previous post? That bus was made available by Senator Bernie Sanders and of course his publicity and media team. Jillian (aka T1dchick) whom we met when she and her team of donors generously gave us diabetes supplies, contacted me to ask if we needed more insulin from Canada.  When we traveled to Canada in March we purchased short acting insulin because we use more units of that insulin than long acting insulin. I had been thinking about trying to acquire a “cushion” of long acting insulin as well but did not feel desperate enough to make a special trip. When she told me about the bus trip with Bernie Sanders and asked if the kids and I would be interested I said yes. If you think I am naive enough to believe that Senator Sanders offered this trip out of the kindness of his heart you are wrong. I was well aware that he has an agenda. After all he is a politician with his eye on the White House. But Mr. Sanders is not the only person that wants something. I want lower drug prices and better access to things my children need to stay alive. I am not exaggerating when I say that either. My children with type 1 diabetes cannot go more than a few hours without insulin before they get sick. Without insulin they will die. A mother will do anything to protect her children and I will step out of my comfort zone a thousand times if there is even a chance of making things better for them.

The day before we were to meet the bus at a carpool in Detroit we were told we might not be allowed to ride the bus. Mr. Sanders’ team was under the impression that all four of us have passports when in fact only I have a passport and I use birth certificates for the kids when crossing the border. We were told we could still come but we might have to follow the bus across the border in our own vehicle. We left early in the morning for the drive to Detroit not really knowing what to expect or how the day would unfold. We arrived at the carpool by 9:30am and I told the kids to leave their things in the car until we found Jillian and knew the plan. I was only able to give Jillian a quick hug before we were swarmed by the media and press. I tend to be self conscious so having a bunch of news cameras and microphones in my face was very intimidating. After a while though I became more comfortable because I was essentially repeating the same story over and over. At one point I looked over and saw the kids being interviewed. The sight made me proud yet sad at the same time. Proud that they are learning to advocate for themselves yet sad that it has come to this to get what they need.

After 20 minutes or more of interviews a gentleman from Mr. Sanders team told us we could ride the bus across the border. When we finally boarded the bus all of the media, press and most of Mr. Sanders team were seated in the front half of the bus. I directed the kids to the empty seats at the back of the bus. Mr. Sanders had not arrived yet but I assumed he had a reserved seat at the front of the bus with his team. When he arrived a few minutes later he made his way to the back of the bus, introduced himself, shook hands and sat in the seat behind my boys.

Sydney Ember from The New York Times gave the impression in her article about the trip that the press and media in the front of the bus were snubbed by Sanders because he gave a quick “Good morning” and then proceeded to “hold court in the back of the bus, talking to patients”. That is exactly what happened and frankly I was impressed. Mr. Sanders took the time to ask questions and listen to the personal stories of people and their struggle to afford insulin in the United States. At one point he invited Joci to sit in the seat across from him and asked her questions like “What is the hardest part about living with diabetes?” Of course most of the media pressed towards the back of the bus to try and catch sound bites or some photos or video but overall Mr. Sanders attention was focused on the “patients”. 😉

After a fairly quick stop at border patrol (considering the number of people in our group) we proceeded to the pharmacy in Canada. We were greeted by a large crowd of additional media and Sanders supporters. As we exited the bus behind Mr. Sanders the enthusiastic crowd and even an accordion player greeted us. As we entered the small pharmacy I did my best to position the kids out of the way at the far end of the pharmacy. I had already given Cyrus an injection on the bus to correct a high blood sugar but he was now complaining of a tummy ache. His blood sugar was still a little high but because we had breakfast earlier than usual and it was approaching lunch time I assumed his tummy ache was not just from high blood sugar but from hunger. I gave Cy another dose of insulin and then let him eat a protein bar from his backpack. I had to chuckle when I saw some of the video footage later of Mr. Sanders inside the pharmacy. Cyrus was in the background munching on his protein bar. I assumed we would buy our insulin, listen to Mr. Sanders address the media about our plights and then get back on the bus. I was shocked when everyone purchasing insulin was asked not once but twice (inside and outside the pharmacy) to share their stories with the news organizations. How do you sum up the struggles of raising three children with diabetes while also worrying about how you are going to afford to buy the insulin denied by their insurance? In all honesty it cannot be done. The fact that diabetes in general is very misunderstood on top of the belief that all insulin is the same (type 1’s have died using the $25 insulin from Walmart because the formula is so different) adds a level of complexity that I often feel ill equipped explain. My hope is that by sharing our unique yet similar stories collectively, our voices can be heard above the “noise” put out by the pharmaceutical and insurance companies.

Moses Was Not Amish

As I reflect on everything that has happened over the last 6 months since we were first denied insulin coverage and then our third child was diagnosed with diabetes I cannot help but feel like Moses. Not the strong, confident Charlton Heston Moses that bellows “Let my people go!”. But the quiet, unassuming shepherd Moses responding to God in the burning bush. “Who am I?” “What if they don’t believe me?” “I am not an eloquent speaker.” “Send someone else.” I am just a stay at home mom with 8 kids who likes to bake cookies, putter in her garden, and feed her chickens. That makes me practically Amish to most Americans! But as I was talking with a friend about these thoughts today she reminded me that like Moses, I have been given the opportunity to represent more than just my family. I am representing the Israelites. Except in this case the Israelites are all the people struggling to afford life saving drugs in the United States. They are being oppressed by high prices and the inability to afford what they need to survive. I don’t know why this private, country girl has been given this opportunity but I am not going to waste it.